Samuel Miles has led a seemingly normal life–the parts he can remember that is. A strange event causes him to forget his former memories and experiences. Waking up inside a cabin in the middle of the woods, he is left with just the clothes on his back, and very few details of his past life. Thrust into an unknown world, he must fight for each breath against vicious beasts of nature, lurking spirits of the night, and a violent, cult-like tribe that wields unnatural forces and power. He has no way to escape, no memory to how he arrived, and little hope of survival.

Samuel’s only chance is with a mysterious girl he finds. Like him, she cannot explain how she arrived in this new world, and she has no recollection of her past life. She seems to know her way around and how to protect herself, but, can she be trusted? Against all odds and plagued by their amnesia, they must work together to survive, unravel the mystery of where they are, how they can escape, and who they really are.

A Night’s Passage had its humble beginnings in a high school study hall. Scribbled into a spare notebook whenever I found the time, fragments of a story soon became an entire journey I lost myself in. When a few close friends had read the start of the book, they asked if I was going to continue writing. Laughing them off as I shut the notebook, I never thought about what it would be like to craft a story where I decided the fate of the characters. Leaving off at certain points in the story, I found myself aching to get back to continuing my work, as each chapter’s end became a new cliffhanger I needed to overcome. As the writing continued, I knew the notebook was not going to be a long-term solution. After converting the manuscript to a digital version, typing the story advanced my efforts and storytelling capabilities. I watched as my word and page count grew. By the end of the year I had almost 300 pages completed. 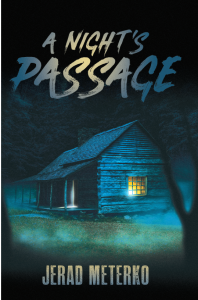 Thrust into an unknown world, Samuel must fight for each breath against vicious beasts, lurking spirits of the night, and a violent, cult-like tribe that wields unnatural forces and power.